Last night we hooked up the most adorable piece of equipment I’ve ever seen: the Roku.  It is adorable!  So tiny and cute and precious.  It needs a name.  We’re a family that names and nicknames everything: children, cats, cars, dishwashers, everything.  It should be called something like “Tiny” or “Sweet Pea” or “Cutie Pie” or “My Preciousssss.”

All of that is a long way of saying that we are now a family sans cable.  Jimmy worked from home today, so I didn’t have the terror of coming home and not knowing how to access programming, but that day is coming.  Probably tomorrow.  Tonight, it took us a few minutes to decide what to watch on Amazon Streaming, but we decided on season 2 of Coupling.

Oh, Coupling.  What a great show.  We caught episodes on BBC America several years ago, and for Christmas one year, I bought Jimmy the complete series.  If you’ve never seen the series, I urge you to right away.  Coupling ran from 2000-2004 and is about a group of friends a la Friends only much, much funnier and raunchier.  If you can watch only one episode, I urge you to watch “Lesbian Spank Inferno.”  Every time we see it (and we’re watching it as I type this), we are on the ground laughing

Most of the cast is unknown to American audiences, but two of them stand out.  Steve, the lead, is played by Jack Davenport.  If you’ve seen any of the Pirates of the Caribbean movies, then you have seen him as Norrington.  You can also see him in Smash. Jane, Steve’s wacky ex, is played by Gina Bellman who currently stars in Leverage on TNT.

Tonight is the next Powerball drawing.  I’ve antied up at work for a ticket pool and Jimmy has as well.  I would love to win $500 million.  I have no illusions about its likelihood, but it is fun to imagine how we would spend it.  Do you do that?  Do you ever think about what you would do if you suddenly had millions of dollars?  The funny thing is that when I was a child, $1 million seemed like a lot of money.  Now, however, $1 million would not be enough to majorly impact our lifestyle  No, I wouldn’t turn down a cool million if it were offered to me (not in any kind of Demi Moore, Indecent Proposal kind of terms although that might be wishful thinking on my part), but after taxes, you’d probably have $500K left.  I’d probably put it in the bank and let it grow.  And that’s your lottery advice from me tonight.

I’ve been adding a lot of books to my Amazon wish list.  My wish list functions as an online Post It note for me.  It’s where I add things I want to remember like books for me or books or toys for Daniel.  I’m thinking about starting Far From the Tree next.  Have any of you heard about it or started to read it?  There have been several books I’ve had to ignore because I can’t read them due to the fact I’m a parent now.  Books like Blackberry Winter by Sarah Jio that is about a 3 year old named Daniel who disappears one day while his mother is at work.  Sure, it’s set in the 30s but no,no, no, no, no!

OK, that’s enough babbling.  I can’t believe there are only a couple days left in November.  How is your holiday decorating going?  How do you stay centered during the insanity that is December?

In which I blather or babble or talk about nothing at all (much like Seinfeld.  A high school classmate once told me that I reminded him of the characters on that show, and at first I was flattered (since at the time it was a huge hit and considered a cultural touchstone and funny) but later I wondered if it were actually an insult since the characters are quite shallow and narcissistic.

OK.  I’ve wasted enough of  your time with this blather.  Here are a few pics from a Day Out with Thomas: 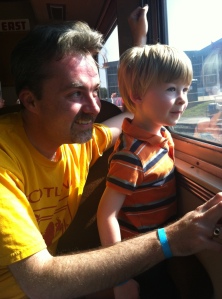 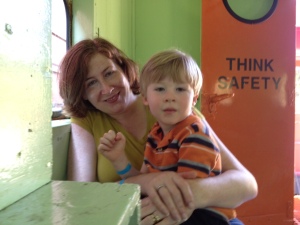 Mommy and Daniel on the caboose

Tell me something good or odd in your world right now!