Saturday was a GREAT day.  Was it because we won $640,000,000?  No (damn it!).  It was the annual library book sale.  It is no exaggeration to say that book sale weekend is one of my most favorite times of the year.  I’ve been attending the sale for 13 years, and I always go on Saturday because I consider that day to be the book sale sweet spot: prices have dropped to make mass buying affordable ($1/paperback; $2/hardback) but the books haven’t been completely picked over (that would be Sunday when the books go for $5 a box).  I have no scientific evidence whether my theory is correct, but it makes sense to me, so I’m going with it. 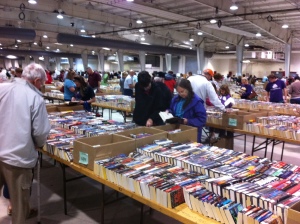 This year was bittersweet because I attended the sale solo. In past years, I attended the book sale with my partner in crime Katie (because we are uber nerd English majors), but Katie had the audacity to move to Florida last year to be with her husband (humph).  Our tradition was to hit the book sale and then have a long lunch with wine. We’ve loyally attended the sale when it was in cramped quarters downtown, in a vacated department store, in a closed grocery store (fun because grocery carts were donated for us to use and books were literally stacked in the old cases) and most recently at the fair grounds.  Last year, the sale was in a smaller exhibition building.  This year it was upgraded to a much larger building.

Saturday I walked into the new space and was immediately overwhelmed and excited at the same time.  Books were everywhere!!!  In fiction alone, there were 5 rows of books two levels deep!  Since the move to the fairgrounds, the book sale has attempted to become a family event; a band was playing while I perused, making me bop (embarrassingly) as I searched.

You might wonder what books I look for.  Fair question.  Is it Proust? Henry James? Ha. Several years ago, you could have found me in the romance section.  I was a sucker for a good historical fiction romance novel in which bodice ripping and hereditary titles were the primary components.  Now, I focus on fiction.

And it’s not  highbrow fiction.  Sure,  you can find a million copies of the last few years’ bestsellers, but what I look for are books I would like to read but don’t want to pay full price for. I have a weakness for The Da Vinci Code-type books, so I buy a lot of them at the sale.  I also like what might pass for a type of chick lit.  I’m not a snob.  I’ll read anything as long as it sounds interesting. What I love about the book sale is how it democratizes books. You can find John Grisham next to Hemingway next to Proulx.  No rhyme or reason.

After a few hours, I’m wiped and tired and ready to leave.  There are tables and tables and tables of books I have not explored, and I feel a pang of disappointment , but there is no way I can examine every book.  I pay and leave.  This year’s haul netted me 26 books for $28.  Not bad.  In previous years, paperbacks went for .50, so it wasn’t uncommon for me to leave with 40+ books.  Now that I have a very active toddler, I’m very cognizant of what I can accomplish, so I think my smaller haul is appropriate.

I’m strange (ha ha you  knew that already) in that I don’t read my new books right away.  I’m the same with gifts.  I like to let them sit for a while before I use them.  Maybe I’ll review some of the books here although I won’t be surprised if I don’t.  These books are guilty pleasures.

It was a good day. 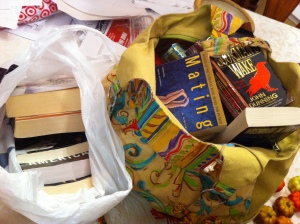 Do you have a book sale or similar festival you attend?

I finally took time away from intellectual pursuits such as celeb gossip sites to read another actual book!

MWF Seeking BFF is Rachel Bertsche’s year-long attempt to find a new best friend.  After moving with her now husband to Chicago from New York, Rachel finds herself without the support system she had in New York.  Though she has made a few friends in the three years she has lived in Chicago, she hasn’t made that one best friend.  As she wrote on the blog that chronicled her quest:

But on a Sunday morning when I want to grab an omelette over girl talk, I’m at a loss. My Chicago friends are the let’s-get-dinner-on-the-books-a-month-in-advance type.  I’m looking for someone to invite over to watch The Biggest Loser or to text “pedicure in half an hour?” on a Saturday morning. To me, that’s what BFFs are. Not just people who know your innermost secrets, but the ones up for grabbing a bite on a whim because they love being with you just that much, and getting together feels easy and natural rather than a chore you need to pencil in.

Tired of waiting for friendships to happen organically, Rachel decides to take matters into her own hands.  She will go on 52 girl-dates, one for each week of the year, in order to find her new BFF.

First of all, oh how I related with Rachel’s loneliness!  I couldn’t believe someone had written a book about the exact same thoughts I have been having about how hard it is to make friends as an adult.  The book was very easy to read, and Rachel described each potential friend vividly, which helped as the number of friend dates grew and it became more difficult to remember who was who.  I like that Rachel interspersed the dates with musings on various aspects of friendship such as what makes a good friend, the number of connections we could make and maintain, friend etiquette, the nature of adult friendships and used research to corroborate her experiences. Rachel also reflected on what she learned along the way and acknowledged qualities she needed to change as well as what she was doing well.  You could see Rachel deepen and mature as the year passed, and her quest to find a friend is also one of self discovery.

Sometimes it was difficult to relate to Rachel and her life.  She was a 28-year-old newlywed who lives in Chicago.  I’m a 34-year-old wife and mother who lives in North Carolina.  She has time for yoga classes, 2 book clubs, brunch on Sunday and dinners out several nights a week.  When I walk in the door at 6pm, we’re racing toward the finish line of Daniel’s bedtime at 7:45 and then if we have energy left, we might watch mindless tv or read.  While it might be possible and even good for me to dedicate an evening out for a cooking or exercise class, I couldn’t do it every night.  These differences don’t take away from the overall purpose and theme of the book, but they do make it more challenging to figure out how to apply her methods to my own life when time is a precious resource often in short supply and I have a tiny man whose needs often come first.

While I’m not sure if I would want Rachel to be my friend, I recommend this book to anyone who has wondered why it is so hard to make friends as an adult and apparently there are a LOT of us.   Earlier this week, in “I’ve Never Had a Best Friend, ” Fadra mused about her past friendships and how she doesn’t have that ONE friend.    All of them comments were along the lines of “OMG, Me Too!”  I retweeted Fadra’s tweet about her post, asking who else felt that way.  One of my tweeps replied that she had tried but realized, “the lack of a BFF was because I expected too much of the friends I made,” another epiphany Rachel made during her journey.

I picked this book because it speaks to where I am right now.  I do have friends (I’m not totally a recluse), but they live a few hours away or even a few states away.   I’m making friends through blogs and on Twitter, but sometimes it is nice to be able to get a real cup of coffee with someone, yet it’s difficult to balance friendship-making activities with the demands of being a working wife and mother.

I fully acknowledge my own faults in this area.  A few months ago, I admitted to being a lazy friend.  I often behave passively in social situations, waiting for others to make the first move.  This behavior might have served me well a few hundred years ago when ladies were expected to be demure ciphers, but it is causing me to miss out now.  A major inspiration for Rachel’s friend dates was her realization that friendships aren’t going to just happen; she needed to be more direct and active in seeking out friends.

I’m realizing that too.  I can’t sit back and wait for people to say, “OMG you’re awesome.  Let’s hang out.”  I need to make it happen.  Tomorrow I’m meeting a huge group of local bloggers, tweeters and all around fabulous ladies for dinner.  It’s a start.  Maybe I’ll need to begin my own series of friend dates.

And seriously?  If you are local and have a book club, let me know.  I’m eager to join one.

How have you made friends as an adult?  Please share any tips you have.