When I walk into work tomorrow, my org will officially have a new name. My org is 60 years old, and this will be its 3rd name but I have only known it by its former name for 15 years. I’m anticipating taking cheat sheets to meetings so I get it right.

Tomorrow we also officially launch our new website. This is the first website in 15 years that I have not managed or overseen.

And in mid-September, we will transition from our home-grown reporting system to a more robust CRM platform.  I didn’t build the home-grown system, but I was responsible for nurturing it over the last 15 years.

I could make all of these changes about me and how it feels a tiny bit like I’m being erased, but that is foolish and myopic. Change happens. It comes whether we want it or not. And it is often bittersweet.

That’s what I leave you with: change is bittersweet, yet inevitable. Maybe it is its inevitability that makes it bittersweet. Change and the march of progress don’t care about feelings or length of time served. They are unsympathetic forces that just happen.

I think that is supposed to make me feel better?

I am a very sentimental person.  That may surprise you.  Or it may not.  I think I tend to come across as reserved and chilly, so I suppose I feel like I must tell you I’m not.  The truth is, though, that underneath the reserve, I am a mess of emotion and feeling.  I cry at commercials.  I cry at books.  I cry when I think about animals in pet stores waiting to be adopted and how lonely they must feel. When I was a little girl, I cried on New Year’s Eve because I felt bad for the year that was ending and would never come again.  Jimmy and I celebrate the anniversary of the day we met in addition to our wedding anniversary.  I remember and honor certain dates for the tiniest of reasons if they are meaningful to me. The reserve acts as a stopper, a protective shell, from all those feelings because without it, I’d be a gooey puddle of KeAnne, unable to function.

Today was Daniel’s first full day of daycare, and I’ve sort of wanted to cry all day.  And I sort of feel silly for feeling that way because he’s almost 3 years old.  I didn’t cry the day I returned to work when he was 3 months old, so why do I feel so weepy now?   We did two trial runs last week in which I dropped him off for a couple of hours, planted myself outside at the Starbucks two minutes away, waited for a frantic call from the daycare to come get him and read actual books. And no frantic call came. In fact, he seemed to have a good time. Cue relief. 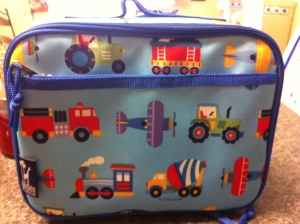 Today was different.  I packed his lunch and breakfast last night, agonizing over what to put in.  I was a little frantic this morning because suddenly our normal routine needed to become a more formal.  Since Daniel had been going to MIL’s during the day, I had gotten into the habit of packing his clothes and taking him to her in his pajamas, and she would give him breakfast.  Now he needed to be dressed.  I’m sure he picked up on the heightened stress.  As soon as I turned left out of our subdivision instead of right, it began.  “Ama,” he said.  “Want to see Ama.”  I grimaced and told him he wasn’t going to see her today and that he was going to school.  “No,” he replied firmly. But he didn’t cry.

At daycare, we walked down the hall to his classroom, and there was one other little boy sitting at the table.  I put Daniel’s bag on the hook in his cubby and handed his lunch box to his teacher. I put his breakfast on the table, and looked at him.  He had hung back, watching me, and I could tell he was processing what was going on: the new routine, the new route, no Ama.  I don’t think he quite understands it yet, but he has realized things are different.  He came to me and asked me to pick him up and clung tightly to my neck. But he didn’t cry. 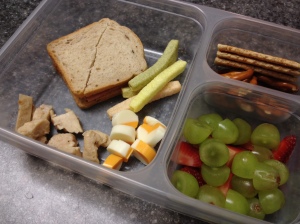 I rubbed his back, told him I loved him, that I would be back later and that he was going to have a good time.  The teacher picked him up and carried him to the big window so he could wave to me.  I walked out and blew him a kiss, and he blew me a kiss.  But he didn’t cry.

Daniel’s world is very small: me, Jimmy and his grandparents.  That’s part of the reason why we have put him in daycare, to expand his world, but I also think that is why it hurts so much.  In our little world, tiny changes feel huge. I worry he feels abandoned.  I worry that he’s hurting.  And I know my mother-in-law is hurting.

For almost 3 years she took care of him every day.  He knows her house as well as his own.  He was cuddled and kissed and loved, and knowing that he was in excellent hands gave me the ability and peace of mind to return to work.  Last week she made him a small pillow out of Thomas-themed fabric to take to daycare for nap time, and it has a small pocket in it to hold pictures of the family so they can bring him comfort.  He adores that pillow and takes out the pictures all the time to look at them.  Friday afternoon, she hugged him goodbye at our last routine drop-off, tearing up.  I watched her hugging him, and him hugging her, and knowing that Daniel doesn’t realize the significance of the day but we do, and I wanted to cry too. 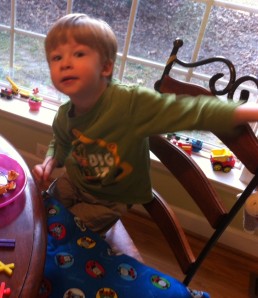 Behold the Thomas pillow, taken with him everywhere

I love the daycare we picked.  It has very high standards and thorough procedures and processes.  Daniel’s classroom is bright and cheerful, and the teachers are loving.  The children appear happy too.  I have no qualms about the care he will receive, and I know he’ll adjust and likely come to love it.  Today is just…bittersweet.  In some ways I think it is more painful to transition a toddler to daycare than an infant.  Daniel knows things have changed even if he doesn’t quite understand what and why.

Today was marked on our calendar. I anticipated it with equal part fear and excitement. It signifies the end of one chapter and the beginning of another.  And there has been a lot of change already for my little family this year.

To my mother-in-law, thank you.  We are so grateful and appreciative of the care you gave Daniel.

And now I’m off to pick up my baby from his first day of daycare and smother him with hugs and kisses.

It’s not a secret that having a child changes your life. After all, there is a small person (not a dwarf) in your house and he or she is kind of hard to miss. And it’s kind of hard to miss the toys underfoot; the cartoons interspersed with episodes of The F Word, Doctor Who, and Top Gear on the DVR; the prehistoric-quality art on the refrigerator; and the massive quantities of whole milk in the refrigerator (I can’t remember the last time I had a glass of milk, let alone whole milk!).

Sometimes the signs of change are obvious (like the constant smell of poo that somehow permeates the house no matter how much you clean). Other times they are subtle.

In the last few weeks, the trees outside of my office building have begun to turn gorgeously red. I love those trees and have contemplated digging up one of them and taking it to my house. Because no one would notice that!

The leaves are starting to fall from those vibrant trees, and they line the walkway to the building. I study them each morning as I walk in, absorbing and marveling at their perfection. This Fall, however, my study of the leaves has changed. My little boy loves nature & loves leaves. Every time we take him outside, he grabs a flower or picks up a leaf. Eventually he will declare that he is “happy.”.

Happy. He doesn’t say “Daniel is happy” or “I am happy.”. He utters that one word: “happy.” But we know exactly what he means.

So now, as I admire the leaves, I find myself thinking, “Daniel would love that leaf.”

Always thinking of him.