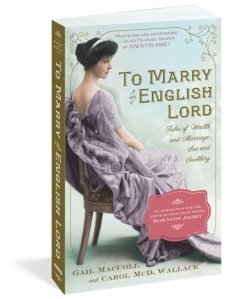 To Marry an English Lord

I am in serious Downton Abbey withdrawal. The good news is that the third series is around 6 months away. The bad news is that third series is around six, long, agonizing, teeth-gnashing months away. In a rare effort to make lemons into lemonade, I started putting together a list of books to help stave off the inevitable shakes and dry heaves from Downton withdrawal. If you’re a fan, you know exactly how I feel!

I was getting ready to download The American Heiress or The Uninvited Guests when I found a quote from Julian Fellowes in which he revealed that one of his primary inspirations for Downton Abbey was To Marry An English Lord or, How Anglomania Really Got Started.

To Marry An English Lord chronicles the real-life “Lady Coras” who journeyed overseas and conquered British society and the aristocracy, making glittering marriages. While many surnames my not be recognizable to modern readers, some like Vanderbilt and Whitney will be. Many of the heiresses who left New York City for the Old Country did so because their money and pedigree were too new and not good enough for the old money families (usually of Dutch heritage). Their exodus coincides with the creation of Mrs. Astor’s 400, a list of the social elite in the city that excluded fortunes made from the Industrial Revolution and sought to maintain traditions and protect the elite from the pernicious influence of newcomers. If you were not on that list, you were a nobody.

The nouveau riche heiresses were valuable to the British. While the British aristocracy considered the first wave of American heiresses to be wild and primitive, they had money. Money that could prop up bankrupt aristocrats and keep ancestral homes in the family, and so began the exchange of wealth for a title and position in society. While there were several waves of American heiresses marrying British aristocrats from the 1870s-1900s, the basic formula remained money for title. Winston Churchill was the product of one of the first of these marriages when his mother Jennie Jerome married Lord Randolph Churchill of the Marlborough family.

How romantic, right? These American heiresses infiltrating the ancient aristocracy is thrilling and just like a fairy tale. And who among us has not wanted to have a title? “Lady KeAnne” has a nice ring to it, n’est-ce pas? I would love to have been the duchess of whatever (styled “Your Grace”) because besides sounding so fluid, it’s the highest-ranking title a non-royal person could hold. I also loved the titles ending in
“-ess,” especially princess and the old Russian and German titles “Grand Duchess.” Grand indeed!

After a build up like that, surely these couples lived happily ever after. They were the embodiment of bedtime fairy tales. Alas, just as fairy tales often hid a harrowing origin and fate for their couples, our Anglo-American couples did not go on to live happily ever after in most cases.

The worst outcomes included depravity, adultery, insanity and abuse. For the brides that fared better, their married lives were a rude shock. They often went from being popular and sought after at society balls to living in a decrepit, chilly country house that their money was expected to fix in the middle of nowhere with their husband and his extended family. Those exquisite Worth gowns had no place there. In addition, the American brides had been raised with a good deal of freedom and affection from their parents; in England, the household revolved around the husband and his needs, quite a culture shock. As well, the American bride had to get used to and even accept her husband’s casual, overt infidelity, a situation for which her upbringing had not prepared her.

The wave of Anglo-American marriages ended after King Edward VII died. His son, King George V, did not favor these marriages as his father had and in America, a burgeoning nationalism was beginning to wonder what was wrong with her native sons. The outbreak of World War 1 a few years later forever changed the dynamic and society of Europe.

To Marry An English Lord was a quick, engrossing read and one I recommend for anyone who is a fan of Downton Abbey. I sometimes forgot I was reading about real women and their fates due to how well the authors told each bride’s story. Sadly, “Lady Cora” seems to have had a much better outcome in her marriage to Lord Grantham than most of the women profiled in the book.

Did you ever wish to be a princess or member of the aristocracy?