For day 3 of my participation in Adventuroo’s project, I am focusing on what happens after work.  Truthfully, this week is probably not the best week for that because J and I have been sick, and our normal routines are off.  Consider yourself warned and try not to judge too harshly 😉

After work, Daniel and I stopped by the grocery store.  Instead of normal dinners, we are sort of scrounging this week because neither J nor I are very hungry.  I didn’t have anything scroungeable at home, so that meant I needed to wander aimlessly the aisles of the store, looking for inspiration.  Normally Daniel is well-behaved at the store, but he has discovered screaming and he really likes screaming in places where it can echo and screamed his way through the store.  Fortunately the other shoppers took it in stride though I wondered if the screaming foreshadowed the approaching time of grocery store meltdowns and glares. 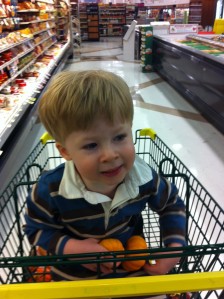 Daniel loves the baby pumpkins though he calls them "apples"

J was home already because he left work a little early.  He started working on our laptops to get them ready for Apple’s software upgrade.  Daniel started playing with his trains and the magnetic letters on his easel.  Honestly, I just stood in the kitchen for a few minutes, trying to figure out what to do next. Thanks to my cold, I really start to fade after 5 this week.  Ah, dinner!  That’s what I need to do.

Yeah, the kitchen is a disgusting mess this week. I should be embarrassed but I'm not. 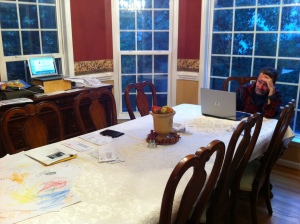 J working on my laptop in the dining room. 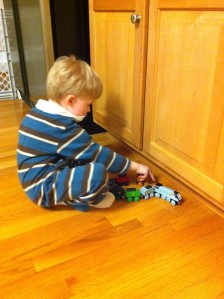 Trains, trains and more trains live in our house 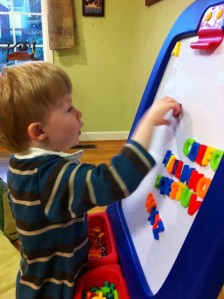 He loves the alphabet

Me:  Daniel, what do you want to eat?

At 7 Daniel’s dinner is ready (not pizza), but he is completely uninterested.  I sit at the table, hoping that will get him to come back over.  He eats a few pieces of the turkey dog, eyes the hummus and says “No more.”  I sigh and watch Jeopardy while he plays and then prep the coffee maker and my lunch for tomorrow. We think part of the problem is that he associates the kitchen with play time because he has a lot of toys in there.  We have a great living room, but it’s on the other side of the kitchen, and we can’t see him when he’s in there, so we spend a lot of time in the kitchen.

Look! I'm a yummy, nutritious dinner that the 2-year-old will reject! 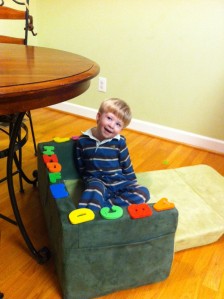 Who needs dinner? I want to play!

At 7:30, we give Daniel yogurt because I want him to eat something and MIL said he hadn’t eaten well that day.  He’s in to making noise lately, and he uses the spoon as a drum on the table.  I’m sure it’s a bonus that in addition to the noise, the yogurt on the spoon makes a nice splat on the table.  For dessert he has  raspberries and apples, which he LOVES. 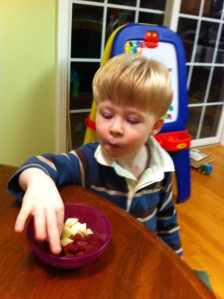 At least he eats fruit

After “dinner,” Daniel and I play with his pots and pans and cook potatoes, carrots, and peas, all foods he won’t eat in reality!  J is having difficulties with our laptops and iPads, so he’s back and forth from the office to the kitchen.

At 8, it’s time for Daniel’s treat, which is his beloved Mint Oreo.   Right now he likes to bite it into the shape of the moon.  After the oreo, he brushes his teeth, which is always an interesting experience.  I’m starting to understand the reason for baby teeth: it’s like they are training wheels.  J preps our room and Daniel’s room for bedtime while I’m supervising tooth brushing. 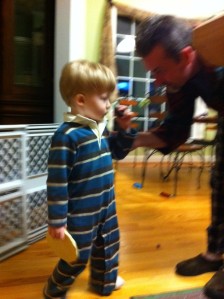 It’s 8:15 and we’re ready to change Daniel into his pajamas and have story time when we remember we haven’t given our cat Bit his medicine.  J gets the pill popper ready while I locate Bit, which is easy since it is only 45 minutes before Bit’s next meal, so that means Bit is right outside the kitchen meowing whenever we come near (told you he was OCD).

Daniel loves the cats, so after we give Bit his pill, we let Daniel pet him.  Bit is a little anxious but cooperates.

After Daniel is in his pajamas, we settle on the bed to read stories.  We usually read about 5 each night though depending on his mood and our energy levels, we might read more. 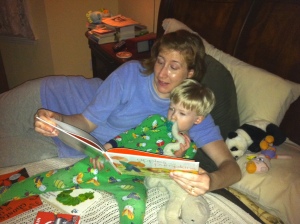 Reading his favorite book about fall

At 8:30, it’s time for bed!  I pick up Daniel (unfortunately he is in a Mommy only phase right now), and J and I take him to his room.  We tuck him in, sing “Twinkle, Twinkle, Little Star” with Daniel supplying the end of each line, give him kisses and tiptoe out.

J and I clean up the toys in the kitchen (though not the kitchen itself). J eats leftover frozen pizza, and I make a thoroughly uninspiring dinner of kielbasa and green beans (told you we are living it up this week) and go to the bedroom to watch an episode of The Office.  We got hooked on it while we were at the beach in August and bought all the DVDs.  We’re on season 6 right now.

After one episode, I’m out.  J’s a night owl, so he stays up a little longer.

And that’s what happens after work!