I know it’s been a busy, active weekend when by Sunday evening, my body begs me to sit down and I have a familiar stitch in my lower back from some muscle that I’ve insulted and mistreated.  I never can pinpoint the one activity that led to the soreness.  Sometimes I refer to it as “Doodle Back” from hefting around 36 LBs of wriggling 3 year old.  It’s not bad, just a nagging reminder that I probably bent a certain way or lifted something in a way that would displease OSHA.  That’s why Advil was invented, right?

Today we spent a good hour or so outside with Daniel.  It was a little chilly (he was bundled up snugly, grandma!), but he was so eager to go outside after being cooped up since Thursday.  He and I walked down our street and down the street that intersects with ours.  It was very windy, but nice.  I hope none of our neighbors minded the miniature flower thief, who thought nothing of plucking a pretty flower here or there.

Daniel is a nut for nature.  We bring out toys for him to play with and balls to kick, but he prefers to pick up leaves, pine cones, flowers and whatever else catches his attention.  He stores his treasures in his big dump truck and loves to push it up and down our long driveway.  Jimmy taught him the various types of leaves, and Daniel delights in finding and identifying them.  I think I could take a lesson from him in focusing more on what I want to do instead of what I feel like I am expected to do. Today he found a huge leave and a teeny tiny leaf and brought both inside. 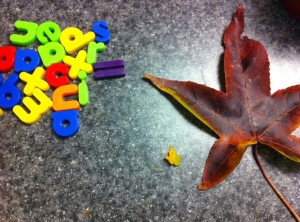 Leaves and letters: a few of Daniel’s favorite things

Daniel has had very strong feelings about nap time recently (as in he prefers not to).  Usually if he doesn’t sleep, he’ll play on his bed fairly quietly.  Not lately.  Oh no.  Lately he has been gleefully Daniel the Destroyer.  He’s happy the entire time he’s destroying his room.  This weekend he didn’t even attempt to nap.  We’d had some success recently in restoring naps, but it looks like Daniel has decided that nap time is definitely optional. As long as he’s not smearing anything on the walls, we’ll deal with it. 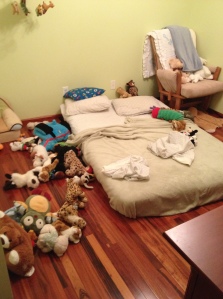 Instead of napping, let’s destroy my room

Daniel took his final dose of antibiotics tonight and since it was a really nasty, gritty antibiotic (flavored with raspberry though!), we promised him a surprise if he took the medicine without complaint (he’s fascinated with spitting lately, especially spitting out foods or liquids that displease him).   Tonight we let him open Salty, another resident of the over-populated Island of Sodor.  Salty was well received and quickly made friends with the other trains.

The great reveal. BTW, the pan on the stove holds party mix I made today. Yum! 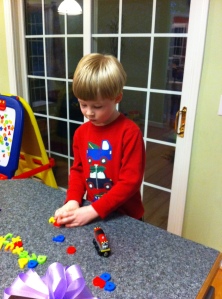 Daniel the Destroyer AKA Daniel the Despot AKA Daniel the Delightfully Energetic is in bed.  We’ve done a lot to prepare for Thanksgiving, but there is still a lot more to do.  After 4 days at home, I must admit that I am relieved to be returning to work tomorrow, even though it is a very short week for me. At least at work, no one will demand to play Candy Land before 9AM.  At least not usually although weird things have been known to happen.  This may sound odd, but I think a few days at work we’ll give me the mental reset I need to prepare for Thanksgiving.  That or a kick upside the head 🙂

I feel silly that I didn’t realize my LTYM co-producer is participating in NaBloPoMo too!  Please stop by and say hello if you have a chance.  Serenity is also participating.  She’s had a hard few months, so she could use a virtual hug.

Have a great week.  The holidays are officially upon us.