We have a joke around the office that Tuesdays suck except it’s not really a joke.  They tend to suck.  Maybe it’s because you feel a false sense of well-being because it’s not Monday.  Maybe it’s because it’s still not far enough into the week to for you not to be depressed that it’s not closer to the weekend.  Whatever the reason, crappy stuff tends to happen often on Tuesdays both at work and at home because Tuesday also happens to be garbage night.  This Tuesday was no exception.  I’ve decided to focus on what happens after 5pm because tricky Tuesday threw me a curve at work in that my scheduled 4-hour meeting ended up going an extra hour, so there was nothing from work to document except for the screaming in my head.

Traffic was horrible on the way to pick up Daniel, so I rolled into the parking lot right at 6pm, setting us up for a rushed evening.  In contrast to Monday’s ridiculously short nap, I was thrilled to discover Daniel had a good nap.  Since we were already behind, hopefully his nap would buy us a little time and it seemed to because he was in a great mood on the way home. 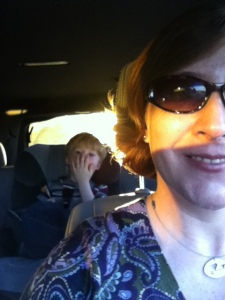 Happy Daniel on the ride home

Since he was a baby, Daniel has loved to try to change the stoplight from red to green by blowing on it.  Nowadays he likes to command me to “blow the light, Mommy.”  Here we are both trying to change the light. 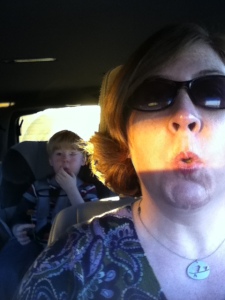 I wonder what the other drivers think.

When we arrive home, Daniel makes a beeline for the leaves in the front yard because he wants to catch a squirrel.  Good luck with that. 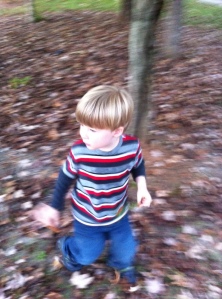 Since we’re so much later getting home than usual, Jimmy has beaten us home and already taken out the garbage.  One odious task done!  Surely that means the rest of the night will be smooth sailing!  I’ve posted before about how we try to prepare a multi-day meal once a week and this week’s is to be jambalaya.  Only we hadn’t made it yet because we didn’t make it to the store on Sunday, meaning we grocery shopped yesterday, resulting in the sub-par Chinese for dinner Monday night.  Since we needed to do a bit of meal prep, we fed Daniel separately and began to prep.  I cooked hot sausage while sous chefs Jimmy and Daniel cut vegetables. 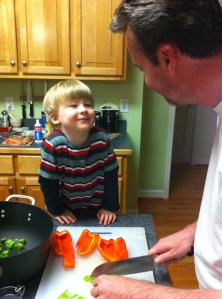 Maybe a show on the Food Network is in our future?

The evening is passing by in a haze of domestic tranquility.  We’re prepping jambalaya while Daniel proceeds from his dinner to his fruit course, while a Thomas DVD gently blares in the background.  It’s almost time to get Daniel ready from bed, and I’m patting myself on the back over how smoothly everything has gone.  Then disaster strikes.  I discover we are missing a key ingredient for the jambalaya.  Jimmy has to go to the store to get it, leaving me to handle the bedtime routine with the 3-year-old who insists on doing everything for himself except when he decides he doesn’t want to and moves at a glacial speed unless it is something he wants to do or the very opposite of what you asked him to do. 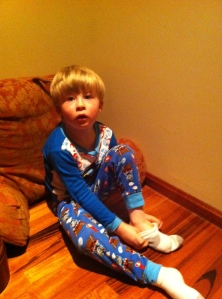 Don’t even think of suggesting pajamas other than Thomas ones right now.

Fifteen minutes and one trip to the potty later, we are ready to read books!  I like to add in seasonal books to our story time and right now, our books are a mix of Halloween and Fall. Daniel LOVES to go “Wooooooooooo” like a ghost right in your face.  He is also into rhyming and jokes.  Tonight’s gem was “That’s not toast; it’s a ghost!” Happily, Jimmy returns in time to read a story too. 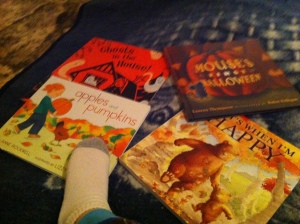 Books and a foot 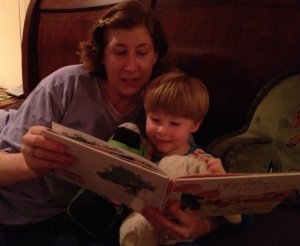 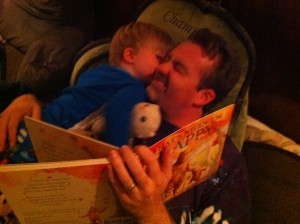 After we tuck in Daniel, Jimmy keeps an ear out for little feet scampering from the bed to the door while I cook.  Daniel usually requires 3 or 4 retucks before he goes asleep.  Much to my chagrin, I discover that I’ve messed up the order of some of the ingredients for the jambalaya, requiring me to pick out some of the vegetables I’ve put into the pot.  This delays dinner again.  Ah tricky Tuesday, you strike again! Hungry and frustrated, Jimmy and I empty the dishwasher and exchange barbs before we realize how silly we are being and apologize.

Dinner is finally ready to be eaten around 10pm.  So much for a simpler evening! 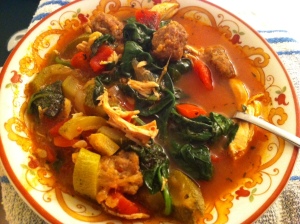 Worth the wait I suppose