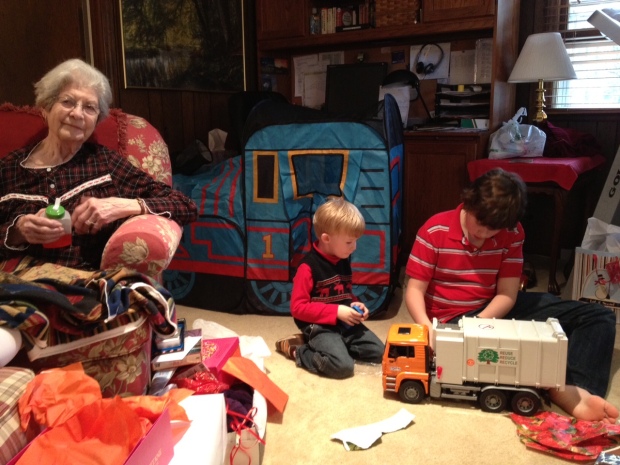 Mum and her great-grandsons on Christmas 2011

Jimmy’s grandmother passed away at 9:15 pm this evening.  We are extremely sad, yet relieved that she is no longer suffering.  Though she was petite, she had a force of will and personality that was much bigger than she was.  Mercedes – Mum – grew up in French Algeria and endured World War II, moving to the United States well after war had ended.

I was intimidated when I met her, this tiny woman.  She was fiercely loved by her family & she had strong opinions.  Until last year, she wore skirts and high heels and was a fashion plate.  We joked that she cleaned house in stilettos. It was high praise that she thought I was a good cook, and I was thrilled that she said I took excellent care of her grandson, Jimmy, and great-grandson, Daniel.

She was devoutly Catholic, yet when we revealed our infertility to the family, she immediately offered money to help us have a child through whatever means we decided.  Though very religious, she had very modern sensibilities and had no qualms with new-fangled scientific methods of achieving children.  She happily attended a baby shower at which our surrogate was present.

Over the last two and a half years, it was so very sweet to see how much she loved Daniel. She came to see him every day and rode with my mother-in-law to drop him off every afternoon.  After our many years of infertility, we had worried about whether Jimmy’s grandparents would have the opportunity to know at the very least that we had a child.  We are thankful for the years that Jimmy’s grandparents have had with Daniel.  Mum called him her “bandito” and thought he was awesome.

We’ve been trying to gently talk to Daniel about Mum being in the hospital and having “sickies.”  He hasn’t seen her since late December, yet how do you prepare a 2.5 year old for this situation?  Or do you?