Day 5 of my participation in Adventuroo‘s project!  This Friday was out of the ordinary because J and I took the day off from work in order to do some major Fall cleaning around the house.

I didn’t sleep well.  I don’t know if it’s the cold or something else, but every day I wake up around 4.  This morning I had the privilege of waking up at 3!  Thankfully I was able to go back to sleep until around 5:30.  At that point, I was awake for the day.  I thought about getting up and writing the post for Thursday but dithered too long because Daniel woke up at 7.

I washed my face and brushed my teeth while listening to him chatter on the monitor. I love hearing his voice and all his new words as he plays with his stuffed animals.  I fed the yowling beasts and then went to his room.  He asked me to come snuggle, so I did.  There was a lot of tail action in his room – stuffed animal tails that is!  He is fascinated with tails, and he has lots of stuffed animals with tails, and he likes to tickle his nose and my nose and J’s nose with them.

After about 20 minutes, we headed to the Master Bedroom in order to change his diaper.  Daniel slipped in front of the door, but I thought it was because of his footie pajamas.  He jumped on the bed and chased Lucy.  I changed his diaper and brought him into the kitchen.  Only then did I put on my glasses.  I noticed weird spots on my pillow and side of the bed.  Curious, I opened the bedroom door and saw a huge pile of cat vomit.  Oh joy.  So that’s what Daniel slipped in and that’s what is on my side of the bed!   I hadn’t noticed it because the hallway was dark and yes, my vision really is that poor without my glasses or contacts.

I quickly stripped him down and put on his clothes and gave his stuffed kitty Juliet an emergency bath.  Oh and I cleaned up the cat puke.  J got up and got dressed because he was taking Daniel to his mom for  the day.  They left, I made coffee (yummy peppermint), put in my contacts and then sat down at my laptop to write Thursday’s post.

J calls about 10 minutes later and informs me that Daniel has puked.  Though he hasn’t been sick like we have been, he’s been gunky too, so he puked up a lot of mucus.   They hadn’t gotten on I-40 yet, so J was able to pull over and clean him up.  He said that Daniel told him he felt better now.  I bet!

When J returned, we had breakfast from McDonald’s to fuel our cleaning frenzy.  I was bad: while I ate only the sausage and egg from one biscuit, I ate the second one biscuit and all.  Oh well.

Let the cleaning begin.  J and I are pack rats.  We’ve also had a pretty eventful and stressful couple of years, so we haven’t had the time or capacity to focus on the house.  The primary objective of the day was to clean up the bonus room so that Daniel could use it as a play room.  Cleaning, however, can become addictive, and soon we were emptying closets and throwing away more than we originally planned.

I cleaned out my hope chest which contained dress up clothes from childhood, National Honor Society pins, a million pictures, a doll, coins from Europe – special stuff.  I ended up putting a lot of it in another bin, and the hope chest is now clean and empty, but we couldn’t remember why we thought we needed to empty it.  Oh well.  It’s ready for whatever now.

This picture contains a few things in my hope chest:

Can't believe what I hold on to!

The records are special because they were my father’s.  He used to DJ when I was younger, and I guess I had taken those records from his collection.  I’m not sure whey there are so many Madonna records.  I wasn’t that big of a fan.  The hoop skirt is from a dress I wore in a piano recital. The box behind it holds the many, many pictures I found in the chest.

After that, we attacked our VHS tapes.  Yes, VHS tapes.  We had purged them about 2 years ago and what was left was on a shelf in the guest room closet but deciding we needed the shelf space more, we were ruthless.  We ended up keeping about 25 really special ones, but behold what we got rid of: 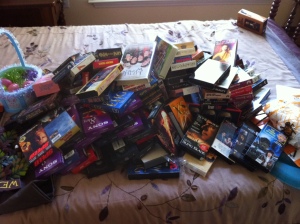 Then J suggested that I do the same to my books in the play room.  We have two built-in floor-to-ceiling book shelves upstairs.  Mine is filled with books.  I couldn’t add another book to it.  I met this suggestion with dismay.  Books are sacred to me and even though most of the books were ones I bought at library book sales (and probably not very good), I still held out hope I’d get to read all of them.  He asked me to consider whether I’d really read them and go from there.  So I did.  I ended up throwing out enough books to fill two boxes.  It’s ok  – after all, the next book sale is in February!

At 4 we stopped because I needed to go get Daniel, and he had a few errands to run.  The house looks good.  We felt really good about everything we accomplished yesterday.  Hopefully we can keep that momentum going. 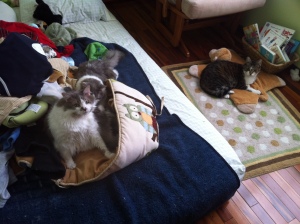 Lazy cats! We also attacked Daniel's room, and it would be nice if the kitties helped!