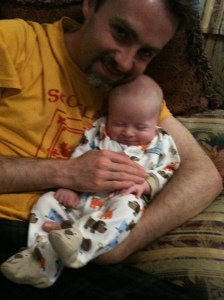 There’s a line in Virginia Woolf’s novel To A Lighthouse that says simply “Time Passes.” It is the only indication that there has been a transition between one part of the novel to the the next. It is very subtle and easily missed. I’m not a huge fan of Virginia Woolf (sacrilege?), but ever since I read that novel, that line has stuck in my mind, and forgive the pretension, but it perfectly describes this summer.

Daniel had his two-month birthday on Sunday, August 2 and turned 9 weeks on Tuesday, August 4. He celebrated those milestones on Monday by having his two-month shots. Ouch. Poor baby. The appointment was going along swimmingly until the dreaded time came. The shots passed quickly, but he was bleeding and cried and cried. And I wanted to cry too 😦 I couldn’t even comfort him as fervently as I would like because I needed to keep pressure on his bleeding thigh so it wouldn’t bruise. For the rest of the day, he slept and has been a little fussy every since. His stats are impressive, though. He now weighs 10lb, 11oz and is 23 inches long. It is amazing to think that he weighed only 6lb, 7oz when he was born. He has put on over 4 pounds in two months, two of them in the last month!

Last night J and I looked through all of our pictures of him–quite a few as you can imagine!–and it was quite a walk down memory lane. The t-shirts that swam on him when he came home now strain over his belly. We joke he looks like Homer Simpson when he wears them. His legs have filled out, and he’s so long! He lost some of the hair with which he was born and after I was slightly distressed by the receding hairline he appeared to have a few weeks ago, he has grown new, quite blonde peach fuzz on top. And his eye lashes!!! They are long and dark, and I noticed yesterday that his bottom lashes are coming in. I think he may have been going through a growth spurt a week or so ago, and now I know where it was focused: his hair and lashes. His cheeks are so firm and chubby, and he has a definite double chin and possibly the beginning of a triple chin.

His behavior has changed too. I can now identify several different cries: I’m pissed; I’m annoyed; I’m hungry; I’m wet; I’m kinda mad but not really and just want to get your attention; I’m a poor baby and please pick me up. They really are different! He has become quite chatty and grins up a storm at us. I love it! He and J have fabulous conversations. I swear that he has made sounds like “Momma” and “hi” in response to me. I know that is developmentally impossible, but it really does sound like it! Of course, I also think my cats say “Momma” too.

This week when we put him on his play mat, he has started looking at the dangling animals with greater interest as if he is trying to figure out how to get them but hasn’t mastered control of his arms yet. It’s like he’s observing his world more and more and wanting to interact with it. My brilliant boy!

I’m amazed it is August. The summer is almost over. I’ve had 9 glorious weeks at home with Daniel and must start thinking about returning to work in a few weeks. That will be very bittersweet because I feel like we’ve been in our little insulated world while I’ve been home, and I’m re-entering reality. I keep reminding myself that the rest of the year is filled with holidays and time off and will pass quickly. But August???? It feels like yesterday we were getting the call that he was on the way. That first night home is still vivid. But we are fall people in my house. Though I’m not eager for him to grow up too quickly, I look forward to taking him to a pumpkin patch and posing him with pumpkins. I look forward to dressing him in cooler weather outfits and showing him fall colors. I think most of all, it amazes me that this time last year, he didn’t exist yet. We started cycling in August of last year. How different 2009 is. August is a memorable month because in a few days, we will reach the 4th anniversary of when we first started trying to have a family. Four years. Four years ago I never dreamed it would take four years, but I would have taken some comfort in knowing that we would reach our goal. In previous years, I’ve marked this anniversary sadly, hoping next year, some year it would be different.

This year, 2009, it is different. Finally. Time passes. 9 weeks. Four years. We have been blessed with a beautiful, sweet, wonderful baby boy, and we love him so much.

Happy 9 weeks, pumpkin! Can’t wait to see how you continue to change!